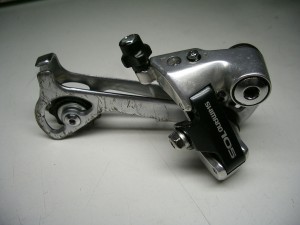 A friend of mine suspected that something was wrong with her derailleur, and she said as much to her boyfriend. Next thing she knew, he had taken the derailleur off her bike and taken the whole thing apart, completely stripping all of the screws and fasteners in the process. My friend was enraged. I told her that she had to find out eventually that she was dating Tim “The Tool Man” Taylor, but she didn’t laugh.

“I have to get a whole new derailleur now,” she said. “Because he wrecked mine. I have to wait for it to be shipped! And I never asked him to do anything to it at all!”

Not wanting to play couples’ counselor, I avoided that last statement and asked her if I could take a look at the derailleur myself. She was right about one thing: it showed a lot of wear. In about another 100 miles she would need to replace it. But she could use it until she received the new one that she had ordered — if it could be put back together.

Button head screws from JHP Fasteners. We used these to put my friend’s derailleur back together.

Luckily, I have a lot of inventory from JHP Fasteners. I looked through what I had until I found screws and fasteners that would fit, and let her derailleur live for another week until she could replace it with a new one. I was surprised to hear they even had a version of the popular pem nuts which I hope to use on an ancient hub I’m repairing.

I’ve been a fan of JHP Fasteners ever since I met one of their reps at a tradeshow. Bottom line is, whenever I need to replace a screw or nut on one of my bikes, JHP Fasteners has what I need. A while back I decided to stock up and just ordered a bunch, which means I’m always prepared to help out a friend when her buffoon BF breaks her bike.