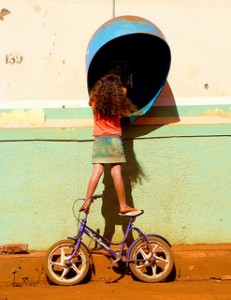 See that? That’s probably not safe. Don’t do that.

As urban cyclists, we all have complaints about people in cars. They honk at us, cut us off, drive without ever looking for us, act like they own the road and sometimes even throw things at us. And yet, motorists are constantly calling us scofflaws. The sad fact is, cyclists are an underclass, and like people in other underclasses, we have to have immaculate records before people with privilege will take us seriously.

But that’s not the only reason for cyclists to clean up their act. The things some bikers do directly endanger other bikers, pedestrians and themselves. If you do any of the following, you need to knock it off, like, yesterday.

“Salmoning” means going the wrong way in a bike lane. Bike lanes are not  big enough for that. At best, you will confuse the other biker who is riding the right way. At worst? That other biker may be forced to swerve into traffic or hit the curb just to avoid you. Don’t do it.

Zipping onto the sidewalk is convenient sometimes but you really shouldn’t do it. You might hit a pedestrian. You might hit a cat. Yo might slam into a mailbox. And you might get hit by a car. I know — you ride on the sidewalk to avoid getting hit by a car, but sidewalk riding actually makes you more vulnerable. Why? Because when you’re cruising through a crosswalk, you may be going too fast for cars too see you. I know whereof I speak. Once, while riding through a crosswalk, a car making a right turn hit me. I was lucky: I walked away. But my front wheel was smashed in and my handlebars were bent. I had the right of way and the driver was at fault, but it made me rethink riding on sidewalks. Riding in the street can seem scarier, but believe it or not, it is safer.

Do. Not. Do. This. This makes drivers hate us, but that is beside the point. You take your life in your hands when you do this. However big of a hurry you may be in, it is simply not worth it. Be alert, be cautious, and wait your damn turn.

You think DUI only applies to people in cars? Nope. Cyclists in Florida have been arrested for riding while drunk. Even if you don’t get arrested, you could badly injure yourself or cause an accident. If you’re out at a bar and have a few too many, put your bike on the bus and save the cycling for morning.

Smart cyclists wear light colored, reflective clothing when riding at night. Daredevils ride in black clothes. There’s no prize for being a daredevil/ninja/idiot. Put on a white shirt, get some reflective tape and ride smart.