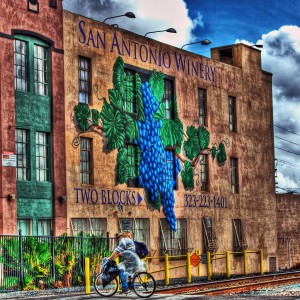 Hang on to your butts, guys, because I’m about to get my snark on. A quick Google search to see if there was any news in the world of biking revealed this article about “wiking” — biking to wineries. My eyes already hurt from rolling them. I mean, really, enough with the portmanteaus,  people. They are getting really, really old. I’ve gritted my teeth through “hangry” and “horngry” and “foodgasm” and “moregasm” but “wiking” is just too damn much. (Sorry, that’s a personal pet peeve of mine.)

This guy is obviously new to biking, and it appears the community he lives in is also. He writes that he and his friends drive to their initial destination with their bikes on a rack and then begin their ride. There’s nothing wrong with that — really! — but can you imagine what readers in Minneapolis or Portland might say if an article like this appeared in their local publications? I can hear them laughing. Last time I was in Minneapolis to visit friends, we all met up on the bike trail and pedaled out into the country to our destination. The idea of loading a bike onto a car and driving somewhere with it just seems so foreign. Doesn’t it?

Anyway, he goes on to say, “You can wear those tight bike shorts with a padded rump. It’ll make your ride more comfortable, but you’ll look goofy.” Ha, ha, ha….ha. Sigh. You’re biking on a rural road, dude. Nobody’s looking at your ass.

He includes several tips for people who might be interested on biking to wineries. Here are just a couple:

Don’t forget to eat real food and drink water. You are working more than if you were sitting in car and you may be sweating as you stop to sip wine. Eat more than the crackers that go alongside the tasting. And keep drinking water. Meltdowns alongside the road aren’t fun. Trust me.

Don’t plan to buy a case. If you have a pannier (bike bag) or a backpack, you may carry a couple bottles you purchase from a winery you like. If you have a basket, you may get in a few more. But remember that whatever you buy, you’ll carry up the hill ahead.

Meltdowns on the side of the road? Whoa, dude. Unless you blew a tire and just realized you forgot your patching kit, or got sideswiped by a car, there’s no reason for a meltdown. Just bring a camelback next time.

Also, I would really love to see someone try to balance a case of wine on a bike basket. I mean, I don’t think most people would even consider buying a case of wine while on a bike trip, but it’s not impossible. There are these things called trailers that some bikers use that you could haul a case of wine in.

I know I’m being kind of mean, but, oh man, what a NOOB! I mean, it’s good he’s taken up biking and encouraging others to do so — we want people to do that. But there’s a way to do that without sounding like a tourist who’s just arrived in New York City and is trying to pass himself off as hardened New Yorker.

Honestly, I might have been on this guy’s side had he not made up that ridiculous word.

What do you think, readers? Will you be going “wiking” any time soon?