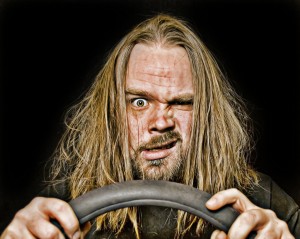 A Facebook acquaintance of mine posted a rant about cyclists. Like all Facebook rants, it is the same as all the rants that came before it, and it can be summed up in five words: “A bicyclist inconvenienced me. Harrumph.”

I avoid Facebook fights, so I’m posting my rebuttal here:

Dear drivers: a bicyclist who slows you down on the road inconveniences you for three minutes, max. Meanwhile, your addiction to that fossil-fuel burning glorified butt cushion contributes to the doom that future generations will face. In the long run, your crime is far worse.

I realize my argument is as predictable as the rant itself. We cyclists do love to cite the fact that we burn calories rather than fossil fuels. But just because we say it a lot, it doesn’t make us wrong. Biking to work can reduce your carbon footprint by 384 pounds — and that’s based on a 10-mile commute. If you’re a tough rider and can ride 15 or 20 miles each way every day, just think of all the carbon you save.

And yeah, I suppose it’s annoying to be slowed down by somebody on a bike when you’re trying to get your kids to soccer practice and you’re running late. But my bike helps the air stay a little bit cleaner while your car does the opposite — who’s doing more for your kids now, hmmmmmmmmmmmmmmmm?

Ok, so maybe that’s a strawman argument. But if we all burned calories instead of gas we wouldn’t be facing a climate change crisis. Well, at least not as the result of cars.

What do you think, readers? What complaints do you hear from drivers about cyclists, and how do you address them?