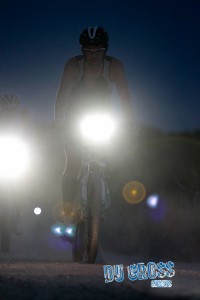 A company called Orfos has come out with bike lights that are so bright, the surround your bike with light. Great for ensuring that drivers see you and cruising around on dark, country trails. Pretty rad, amirite? Here are the details from the article on C|Net:

The Orfos Flares create their powerful glow, which the manufacturers claim can be seen for a full 360 degrees, in a unique way. They have nine half-watt LED bulbs embedded in clear silicone to create a powerful diffuse light that makes the red light equal to 300 lumens, or as much as a car’s taillight, and the white light equal to 500 lumens, as much as a car’s daytime running lights, according to the manufacturers. Speaking of running lights, the manufacturers of the Orfos Flares say they’re powerful enough to be seen even in daylight, so they give you an extra chance of being spotted on a gloomy morning by drivers who might not have had their coffee yet.

Sounds awesome. However they don’t come cheap. A set of a red and white light is $229. Ouch. However, if you bike in an area full of drivers who are too obtuse to look for bikers, or on trails that aren’t lit, you might want to consider investing in a set of these. I gotta admit, I am sorely tempted here. I sorta like the idea of blinding drivers with my sweet sweet headlight.