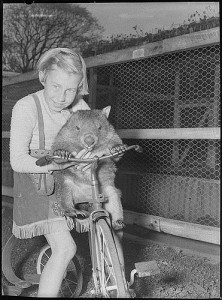 Bikes and animals can coexist.

One of the great things about biking is that you can encounter all kinds of wildlife on trails. A downside, though, is that sometimes we get more than we bargain for when we cross paths with animals. Forget about being chased by a dog while riding your bike. That’s kid stuff. These animal vs. bike confrontations will knock you off your saddle.

Deer in a Bike Shop

In Pleasant Valley, New York, a doe wandered into a bike shop and raised hell. Her hooves couldn’t gain traction on the tile floors, so she “skidded around the shop,” and got herself locked in the bathroom. Though she crashed into just about everything, she didn’t cause any real damage, and was removed from the shop by local authorities.

In Minnesota, where the Department of Natural Resources implemented a very successful program to bring back once-extinct wild turkeys, groups of wild turkeys can often be seen patrolling the streets of Minneapolis and surrounding suburbs. Unfazed by humans, these turkeys have been known to chase cyclists. Can your bike outrun a tom turkey? Take a trip up north and put your wheels to the test.

While riding through the plains, a cyclist was knocked off his bike by a leaping antelope. The video is pretty amazing, but you’re a bad person if you laugh, because it’s clear that the cyclist was pretty badly hurt.

Animals vs. Bikes in Florida

Guys, I know we can top these. Florida fauna includes much scarier things than turkeys. Which ones have you encountered on your bike? If you’ve played “chicken” with an alligator, or been dive-bombed by Jamaican fruit bats, or found a snapping turtle wedged under your tire, let me know! I want to compile a list of hilarious stories of cyclists’ encounters with Florida wildlife. Leave your story in the comments or send an email to [email protected]